Silicon Valley housing is among the most expensive not just in the U.S., but in the world.  Areas with better schools are more costly still.  So what happens when we see a big increase in a highly paid industry concentrate its efforts in a small corridor?

What is happening with hospitals along the Los Gatos border?

First, let’s have a look at what we see taking place with hospitals and related facilities along the northern end of Los Gatos and into San Jose and Campbell.

Good Samaritan Hospital (in San Jose 95124 along the Los Gatos border) and El Camino Hospital of Los Gatos (“Los Gatos Community Hospital” before 2008) are just about one and a half miles apart as the bird flies, and there’s been a tremendous influx of new medical facilities between them – especially near Good Sam.  Perhaps the most notable is the Stanford Hospital Cancer Center, which can be seen from Highway 85.  A drive through Cambrian, Campbell, or Los Gatos in this west valley area and you’ll also find signs of the Palo Alto Medical Foundation, Kaiser Hospital medical offices and other more remote entities with a local presence.  This is smart business on their part and can eliminate fighting commute traffic for patients.

But what is it doing, and more to the point, what will it do to our already sky-high housing prices?

This morning I mapped out the local hospitals and a few of the medical centers and offices (link goes to maps on google for this search).  Here’s roughly what the simplified concentration looks like today: 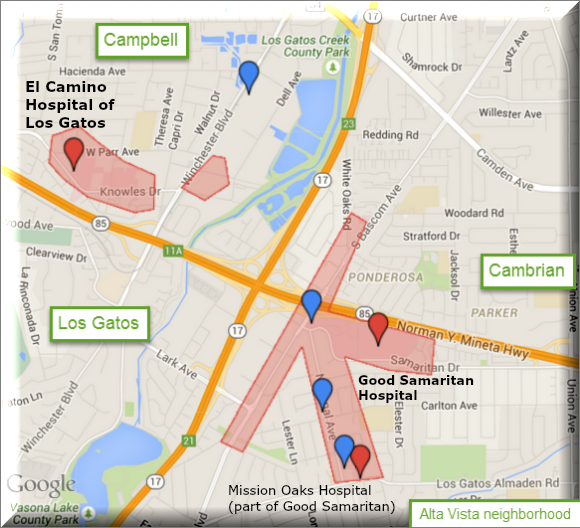 These are just my casual observations and of course there are many other medical office areas not shown – but they are the areas which appear to me to be the most densely populated with cancer treatment centers, physical theraphy sites, surgical centers, rehab facilities, doctors’ practices, etc.

Because many of the adjoining areas are zoned as residential, it’s unlikely that neighborhoods full of homes would suddenly become a doctor’s office, pharmacy, or medical supply stores. However, there are commercial, industrial, manufacturing and other non-residentially zoned areas that could potentially support our burgeoning medical industry – many of them in the Cambrian area of San Jose or in Campbell along Bascom Avenue or Winchester Boulevard – generally to the northeast of the two hospital areas.  So given the zoning restrictions, and our massive housing shortage that would make rezoning residential to office space unlikely or impossible, I think the expansion of this industry between and around the two hospitals could look something like this in a couple of decades (my best guess only! no guarantees!): 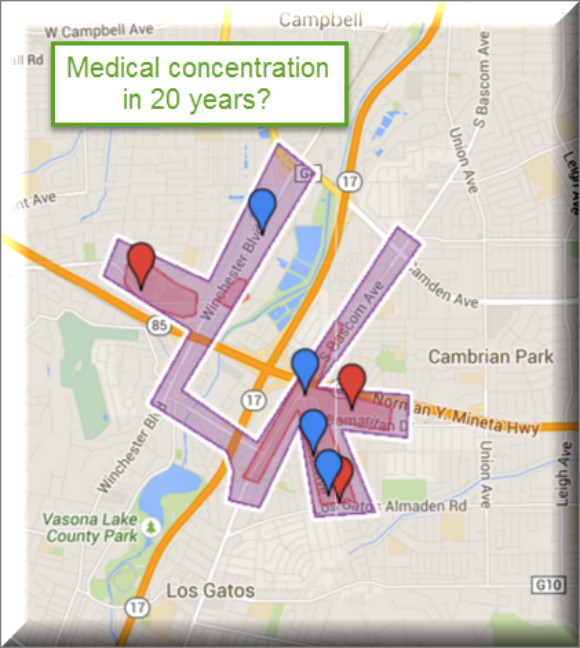 Often the area of influence for a hospital can often go at least one freeway exit in any direction.  Here you’ve got two hospitals, both fairly close to the intersection of two freeways – so I think it’s very possible that my guesstimate is on the conservative side.

Given the medical expansion we are seeing, what will that do to home prices?

There may be more growth into Los Gatos, but I would project that most of it would go into Campbell or San Jose since Winchester Blvd and nearby is already industrial or commercial, and much of Bascom is now commercial.  Here are my basic predications – not guarantees and not investment advice: