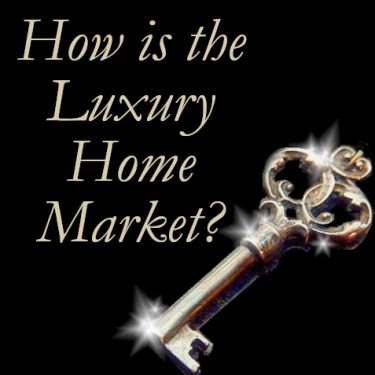 Luxury home sales are going like crazy in the west valley areas of Santa Clara County. Right now in Almaden Valley, Los Gatos, Monte Sereno and Saratoga, there are 115 houses for sale listed at or more than two million dollars (just checked MLSListings.com), and in the last 30 days 52 have sold and closed escrow in those same areas and price ranges. For the Almaden – Saratoga region generally, then, there are 2.212 months of inventory in the over two million dollar price range (115/52). That makes it a strong seller’s market. Things have certainly stayed lively since last year. (In the same region, there are 39 pending sales.)

Next we’ll look at these four Silicon Valley communities separately to see how the luxury market in each one is faring overall.

Currently in Almaden there are 12 houses for sale which are listed at or over $2,000,000.  In the last 30 days, 3 sold in that price range (with 2 sales pending). That makes for 4 “months of inventory,” which can be considered a balanced market in many areas though is leaning towards being a seller’s market. That would mean this luxury market has good turnover but is not as strong a market as elsewhere. It’s a close to balanced market in Almaden Valley among the most expensive real estate offerings for sale. Five to six months is balanced and over six is a buyer’s market.

Right now there are 46 homes listed in the luxury price point of $2 million or more, and 24 have sold & closed in the last month, so there is a 1.92 month supply of inventory in Los Gatos. That means it’s a hot seller’s market in the Los Gatos luxury homes. What about pending sales? There are 23 homes listed in this price range that are currently “under contract”.

In Monte Sereno, a very high end but very small community of only about 4,000 residents, currently there are 11 properties for sale in this upper pricing tier. Two have sold in the last month, so there are 5.5 months of inventory. There is one house under contract or “sale pending” in Monte Sereno right now as well. This leaves Monte Sereno in a balanced market, but with such a small inventory sometimes these numbers swing wildly over a short period of time. (All but a tiny handful of properties are within the attendance boundaries of the Los Gatos Union School District.)  Please note that this constitutes all of properties for sale and pending in Monte Sereno; all active and sold properties were in the $2M+ range.

Saratoga enjoys a good number of estate properties and very high-end real estate. As of today, there are 46 such homes on the market and 23 sold and closed escrow in the last month. In Saratoga, the months of inventory is 2, not too far off from neighboring Los Gatos. This is also a strong seller’s market. Additionally, there are 13 pending sales in this upper price range.

Please note: In all of these areas, “the market” will be influenced further by the exact pricing tier ($2.1 million is a very different market than $15 or $20 million!), each property’s school district and whether or not it’s got a view, any issues (busy road, power lines, too-close proximity to anything negative) plus of course condition. A nicely remodeled home from top to bottom will get far more attention, in every price range, than one which is 20+ years old on the inside. Additionally, homes will be helped if they are placed in areas where neighboring properties are equally valuable or more so, and they will be hurt if they are over-improved for the neighborhood.

Isn’t it all about the schools?  Some people seem to think so – but we should see for ourselves.  Let’s just consider the impact of schools on a property’s micro-market. If you were getting ready to buy or sell, you would make this one of your factors to consider, but not the only one.  For this brief example, we’ll use the high school district.

These homes are selling the fastest by far!

Campbell schools don’t have much inventory, but there is plenty of demand for it when it comes. Los Gatos Saratoga Unified has the most inventory and the slowest movement, but it’s still a sizzling hot seller’s market at just over 2 MOI in the luxury market.

The “conventional wisdom” is that the best schools will always have the best market.

But we can see from this brief study that it’s not the case for Saratoga if we’re comparing the over $2 million property by school district. How can this be? A number of factors could be at play. Many home owners are not opposed to the use of private schools. Other prefer having their kids at schools which are less academically stringent (and perhaps a more “normal” environment – that’s a comment I hear a lot). And some folks don’t have kids living at home, and would much rather have more house for their money and not pay for schools they don’t need. Lots of reasons could be impacting this situation. No matter the cause, it’s a good wake-up call to not assume the drivers of the market.

How long will it take to sell a luxury property in Silicon Valley’s west valley area?

For these 4 zip codes generally, the 39 homes now under contract had an average days to sell of 33. Of the 39, 4 sold in four or more months, and 2 more in over one month, but the rest of the 33 sold in under a month. Some took only a day (or less) to sell, while the longest (and most expensive, almost $9M) took over 300 days! It is not uncommon for a high end home to take 90 days to sell or more, but in this market it’s more likely to sell in under 30 days.

How can this information help you if you’re are a buyer or seller?

If you are a home owner thinking of selling an estate property, it is a tremendous help to know whether or not there is much demand for the type of home you wish to sell.  If nothing is “moving”, either the whole lot of listings is overpriced (which can happen) or buyers are voting with their feet and choosing another community in which to buy. Sometimes this happens because of schools, other times simply because the lower price ranges make a home purchase in a more exclusive area possible now when it wasn’t as possible before. In any case, if you need to sell in an area where little or nothing is selling, you will have to price your home so attractively that it’s probably painful. Remember, the one thing we do not control is the market.

On the other hand, if homes are selling, you’ll want to study what is and isn’t selling. Sometimes it’s “issues.” Sometimes it’s the presence of or lack of something, such as a pool, remodeling, conforming neighborhood (where all homes are tidy and appealing).

If you are a home buyer interested in purchasing luxury real estate, you will also benefit from knowing how much competition there is for the type of home you wish to buy. Right now, you may have an easier time negotiating in Los Gatos rather than in Monte Sereno. Of course it depends entirely on the house you like and whether or not it’s priced right.