The percentage of all cash sales in Santa Clara County

In 2012 and 2013, Santa Clara County saw many single family homes selling for all cash, no loans. The peak may have been in March 2012, when the percentage of all cash sales was a whopping 25%. That was the beginning of a long housing boom, and today the percentage of all cash sales in Santa Clara County has settled down significantly, though it is still in double digits in most months.

Today I crunched the numbers on MLSListings.com (first pulling the number of sales per month, then the number of cash sales, and after exporting the data to excel, did the math to get the percentages). The chart below reflects the sales of homes sold with all cash, no loans in Santa Clara County among houses and duet homes, which combined are known as single family homes.  (Duet homes are not the same as duplexes.) 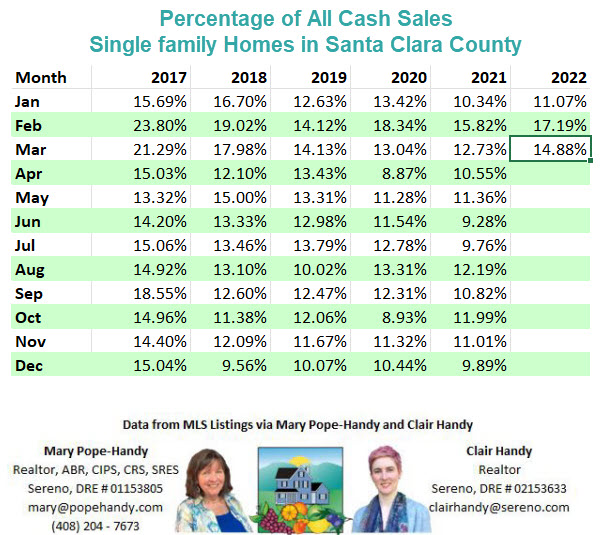 The data from one month alone does not make a trend. Please note that in the percentage of all cash sales, above, we had under 10% in 3 times in the last year, but then it did bounce back up into double digits again, despite the raging Covid induced white hot seller’s market.

What does the lower percentage of cash sales mean? In Santa Clara County, we have had some hyper inflation of home prices in the last four to five months, so it would make sense if the all cash, no loans buyers receded a little bit. But that hasn’t really happened. Buyer fatigue? Maybe. Or maybe the cash buyers still believe in Silicon Valley real estate and expect to do better as the interest rates rise. It’s hard to know. We don’t track buyer motivation as a data point.

Historically, what has happened with the percentage of all cash sales in Santa Clara County?

This is a data point to watch.

When the ratio is low, for home sellers, it may suggest that conditions are not as strong as in recent months for selling. For buyers, it may imply that conditions are a little better for writing offers closer to list price and for keeping all of your contingencies. We’ll need to chart other numbers, too, such as the average sales to list price, the absorption rate, etc. to be sure.

Right now, though, about 15% of the sales are all cash, and it’s really NOT an easy time for buyers as most sales involve overbids (often 115 – 120% or more of list price) and no contingencies.

I think you could read the percentage of all cash buyers as a data point of home buyer’s confidence in the real estate market. Right now, that percentage is not too different from other Marches in this pandemic period. So it seems, generally, to be holding steady.

March is usually a little softer than February. What’s interesting is that we aren’t seeing a stronger response to buyer uncertainty since Russia invaded Ukraine on February 24th. The market did get a bit of a ripple, but you would not know if from this data.

Interest rates are rising. I believe that as it gets harder for buyers with the higher rates, there will be more cash offers showing up. We’ll be watching to see what happens.

“Why do sellers care if the offer has a loan or is all cash?”

Cash offers: what do you need to know if buying “all cash”?

What is a contingent offer?