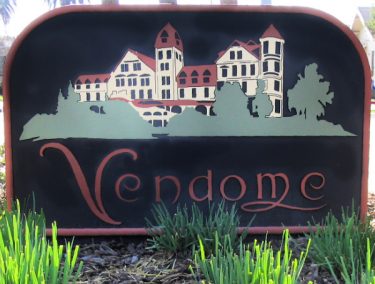 San Jose’s Vendome neighborhood is a beautiful pocket in downtown San Jose, not too far from Japantown. Because the area is small, many locals have never heard of it. I had the pleasure of selling one of these gorgeous homes years ago and am enthusiastic on the charm and location of this neighborhood.

In this article, we’ll cover:

Last summer there was a walking tour offered for this area. I would love to go if it is possible in the future again. 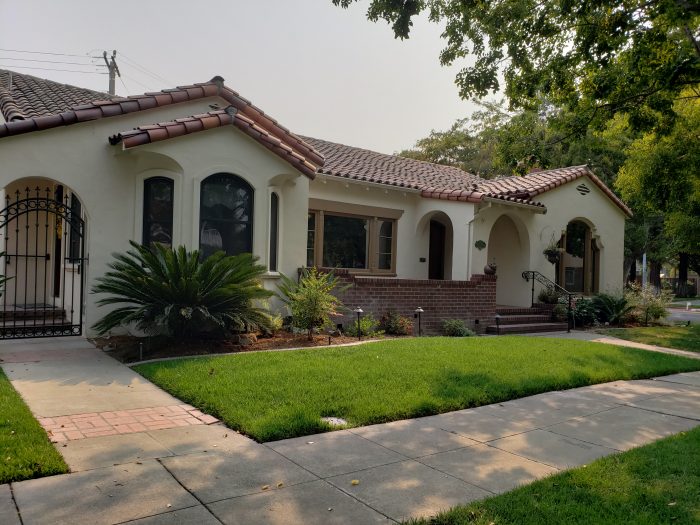 The streets are scenic and the few dozen homes well cared for, but there’s much more to this area. It enjoys great access to downtown San Jose, to parks,  restaurants, museums, and freeway access. Coleman Avenue also makes for a quick trip to the airport and the light rail stops along First Street (the Japantown / Ayer stop). It also can boast some great historic roots, too.

Where is the Vendome neighborhood?

This area is part of the larger Ryland area, named for Ryland Park on the southern end of the shaded map area. The streets are Ayer Avenue, Rankin Avenue, and Losse Court and they are between First and San Pedro. This area is in the 95110 zip code right near the border with 95112 (which begins at N 1st St). The Losse Ct section is where the Hotel Vendome’s annex used to sit.

Here’s a closer view of the Vendome area: 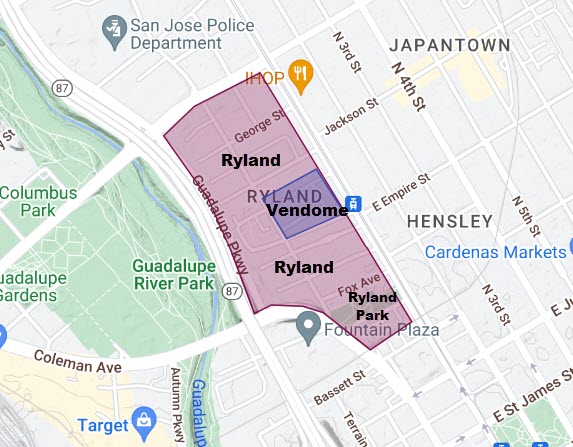 Side note: the nearby Hawthorn Place subdivision was built first, starting in 1916 and continuing through the 20s with the last one built in 1940, all along Hawthorn Way. This may have paved the way for the Hotel Vendome to morph into the Vendome neighborhood.

One of the most wonderful aspects of the community is the variety of architectural styles. There are probably more Spanish Eclectic than any other style, but you’ll also find Tudor, Victorian, Italianate, Prairie, and even some ranch styles houses there. (A couple of houses are reminiscent of Monterey Revival, too.) 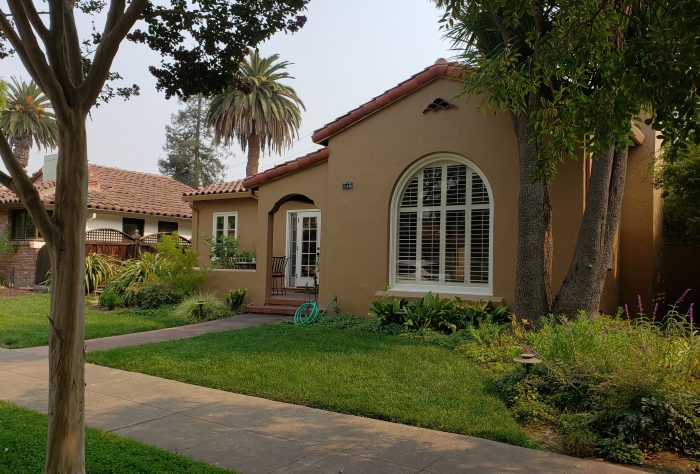 I have a big soft spot for all types of Spanish style homes, and this area has plenty of them to love. 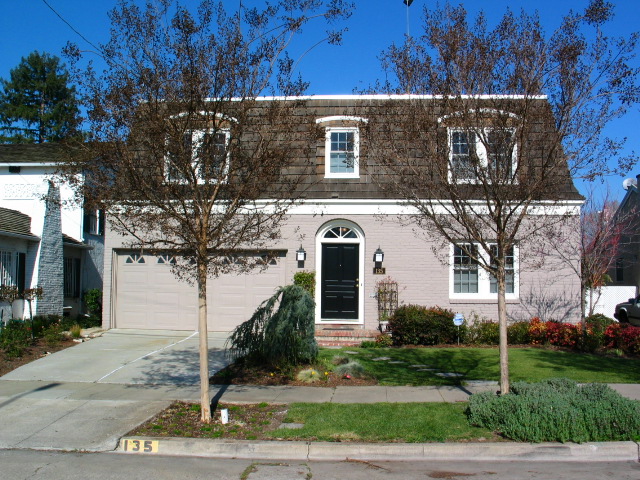 This area was all or largely built by the same contractor, but it’s a very pleasant mix of styles, as is shown in the image below.

There are some ranch style homes here also, though not many.

I’ve had the pleasure of seeing the inside of a few of these houses in addition to the one I sold, and the interiors often preserve a lovely historic moment in time. In the photo below, there’s a wall niche. I’m not sure if the metalwork was original or a later enhancement, but it’s a nice fit, if added later. 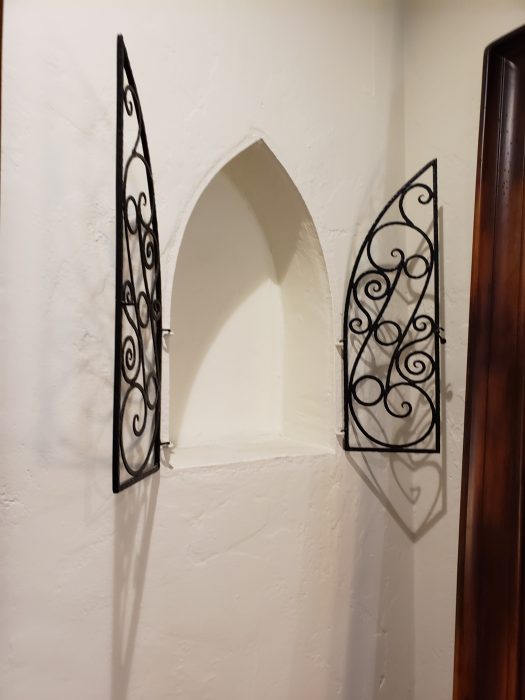 Are there any concerns with this part of downtown San Jose?

As quaint and charming as this area is, it’s still downtown San Jose. Urban living can include more noise and crime, so be sure to check the crime statistics online. In 2018 there was a homicide there – but I need to add that this was unusual.

The homes here are historic, which is a lovely way of saying that they are very old. Any given home may have ancient infrastructure. I once saw a boiler in a Vendome basement that looked like it was as old as the house and covered in asbestos. Wiring, plumbing, and all of the systems may need upgrades.

The Guadalupe River has a history of flooding, but this area is not in a 100 year flood plain. Rather, it is in a 500 year flood plain, meaning that in any given year there is a .02% chance of flood. Flood insurance near the river may not be a bad idea – do your own research on that.

It’s an urban area, so unsurprisingly, there’s going to be noise from airplanes (this is close to the airport), Highway 87, and other major roads.

Some interesting history – in brief

If you enjoy local history, you will love the Vendome neighborhood! It’s been home to several mayors of San Jose and their families, and with good reason.

This little pocket appears to be part of the original Pueblo de San José de Guadalupe, the first settlement in California (or in Baja California), which was founded in November 29, 1777.  By some accounts, the Pueblo was begun at approximately what is today known as the intersection of Hobson and San Pedro streets along the eastern bank of the Guadalupe River. (See map further down.)  The river had quite a flooding problem, as is well known, so the Pueblo was moved to what is today the Plaza de César Chávez.

A helpful resource is San Jose’s Luis Maria Peralta and His Adobe, by Frances L. Fox, published in 1975. On page 8 she states that California historic landmark #433 marks the original site on Hobson just west of N First Street.

Disclaimer: some other sources site a location near city hall (“including and surrounding” the civic center) location for the Pueblo’s center and there’s a historic marker at City Hall, front parking lot planter, 151 W Mission St for the Pueblo. I’ve looked at the historic maps online and the only super clear thing to me is that the boundary was the eastern side of the Guadalupe River. There were just 14 families in that original settlement, and it’s hard to tell how much land was included.

Fast forward to the late 1800s. In 1888 the grand Hotel Vendome, the area’s namesake, was built. It opened in 1889.. The hotel was set in 13 landscaped acres and boasted 150 rooms. It was said to be quite impressive (see a photo here), but it had a fairly short tenure and several fires during those years. By the 1910s, nearby areas were filling up with new home construction.

There’s a wonderful booklet with lots more info and several great photos of the hotel, its grounds, and its history, can be found here.

The blue pins in the map below are the first Pueblo setting (in the Ryland area, on the border with the Vendome neighborhood – assuming this is correct) and the second one, in what is now downtown San Jose. 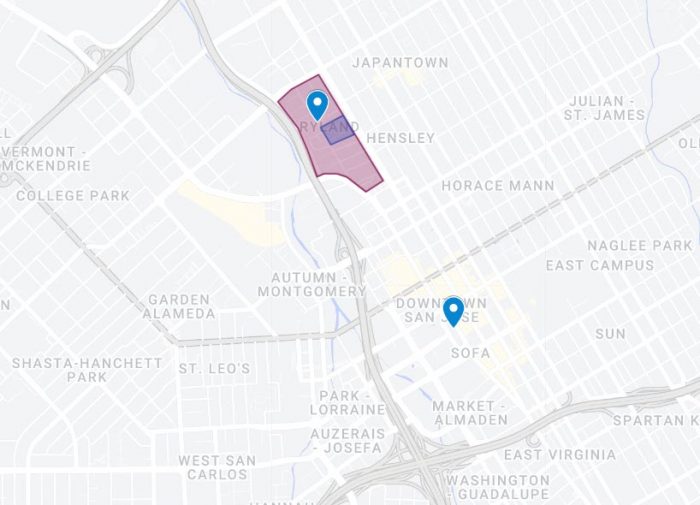 With houses being built, the land value must have skyrocketed. Additionally, new hotels were opening in downtown San Jose at that same time. One of them was the iconic Sainte Claire Hotel, which opened in 1926. Many other local changes made this location less desirable.

A Realtor, J. Bradley Clayton, who was also a developer bought the hotel and its grounds, and razed it in 1930 for a subdivision of new houses that would become the Vendome neighborhood. It was originally called the Vendome Grounds. These houses were built by James A Clayton & Company starting in 1930.

What do homes cost in the Vendome neighborhood San Jose?

Because this is such a small area, there aren’t many sales! The list below goes back as much as 24 months, so pricing could be different today. As of this writing in early 2023, homes are selling anywhere between about $1,000,000 to about  $1,800,000 in this little community. Most will be in the low 1 millions.

Vendome homes for sale or sold in the last 2 years: