What Happens When Inspectors Disagree About the Property? 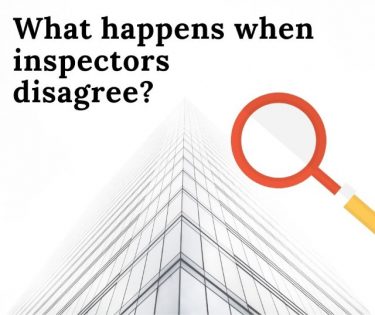 Silicon Valley home buyers, sellers, and their real estate agents rely heavily on the professional advice, insights and opinions of home inspectors, whether it’s for the property generally (house, townhouse or condominium inspection) or for some other component, such as the roof, foundation, chimney, pool, heater, etc. One of the most frustrating – and sometimes maddening – experiences for everyone involved happens when inspectors disagree and their inspection reports provide conflicting advice.

Either extreme is bad, either “calling” something when it’s fine or missing something if it’s not.  Often resolution is accomplished by having yet another inspector come out OR by having the two who disagree meet at the property to sort it out.

There are other inspector disagreements which can cause stress, confusion and upset too.  Sometimes it’s the best solution to something amiss.  At other times it may be the level of danger present with a problem.

“Gray areas” are also problematic: Recently I had two inspectors, both of whom I trust and respect, disagree on whether or not the crawl space was safe to go into because it was extremely muddy.  If there’s standing water in the crawl, most inspectors won’t go in because it’s dangerous (fear of electrical shock if there are any wires present – and usually, in the crawl areas there are wires).  If it’s muddy, apparently some will go in and some will not (concerns about shock and chemical hazards, per link above).  In the case of my inspection, one inspector didn’t want to go in but the second one did – which confused and upset my home buyer because he felt that if one of them could go in, both could. I phoned and explained my buyer’s upset and that inspector did return and do the crawl.  But it was with great misgivings because he wasn’t convinced it was safe.  That said, there was a LOT of damage under the home (so much so that my client canceled the sale). Had they not gone into the crawl, the results would have been disastrous for my client.

I have searched on several professional inspection websites and not been able to find an answer to this last question about muddy crawls. There’s certainly support online for being wary about them, but apparently not everyone is equally concerned so it does not appear to be a hard and fast rule or guideline.  For standing water, yes – it’s definitely a “no entry” situation. But for muddy it remains unclear, as far as I can tell.

One of the best ways to avoid having conflicts is to hire exceptionally good inspectors.  Most of the time, they will agree – they will not “over call” nor will they miss things.  Of course inspectors are human and can have a bad day, get distracted, or simply make a mistake.  If that happens, most of them will go out of their way to try to “make it right” one way or the other.  When they do, we know that they can be trusted inspecting our clients’ homes or future homes and that they will do their best to give buyers and sellers the best information available.

When inspectors disagree – what can you do?

On the practical level, when inspectors disagree, normally we would advise getting another inspection done or bringing in a more senior person, if that option exists, from the company providing the inspection and report. Sometimes an inspector is less experienced and the more experienced person can provide clarity or construction. When bringing in another inspector, be aware that some of these professionals will be defensive, and possibly angry, that their judgement has been called into question. Handle with care. Often it’s best to meet with inspectors separately, but each situation has to be looked at individually.

In terms of my real estate practice, if an inspector makes a big error and then will not try to make things right, I won’t hire him or her again, of course.

Would You Recognize Signs of Subterranean Termites If You Saw Them?

What is Cellulose Debris?