What is a “Kick Out” Clause? 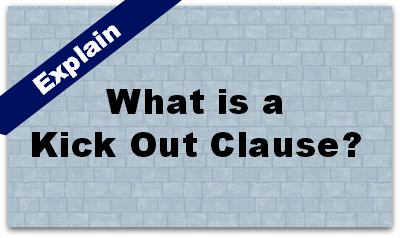 This is a bit of a surprise to most Silicon Valley home buyers, who tend to think that they can walk away from a property during their contingency time frames, but a seller is stuck with them, no matter what.  That’s simply not true!

In the last few years, both the CAR and PRDS contract forms have been updated.  Both now include language that specifies the seller’s right to cancel the contract.  Both parties have rights and responsibilities. Failing to do what one has promised to do in the purchase agreement could potentially find that home buyer out of contract and without that home to buy.  There are many shades of gray, and few things are automatic.  If a seller is going to give a buyer the boot, there will be a “notice to perform” tendered first.

Let’s talk specifics.  When can the seller kick out or release the buyer?

This concept is most likely to be utilized in purchase agreements when it’s a bank owned, short sale or contingent upon the sale of another property deal.  But if a buyer defaults by not depositing money to title, not providing proof of funds in the specified time frame or failing to do some other contractually promised items, the seller may be able to kick that buyer out or release him or her.