Why is it so hard to buy Silicon Valley real estate right now? 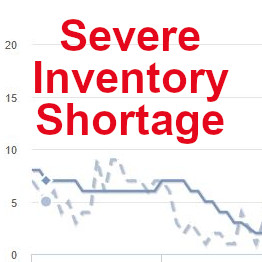 Why is it so hard to buy a home in Silicon Valley?  Most of it has to do with our ongoing and severe inventory shortage.

I initially wrote the article below on Feb 9, 2012.  I thought it was bad then – and I suppose that relatively speaking, it was. But it’s much worse now!

Today is May 1, 2017, and I ran the numbers of available single family homes in Santa Clara County in a chart comparing since January of 2012.  Have a look, and please note the year over year numbers: 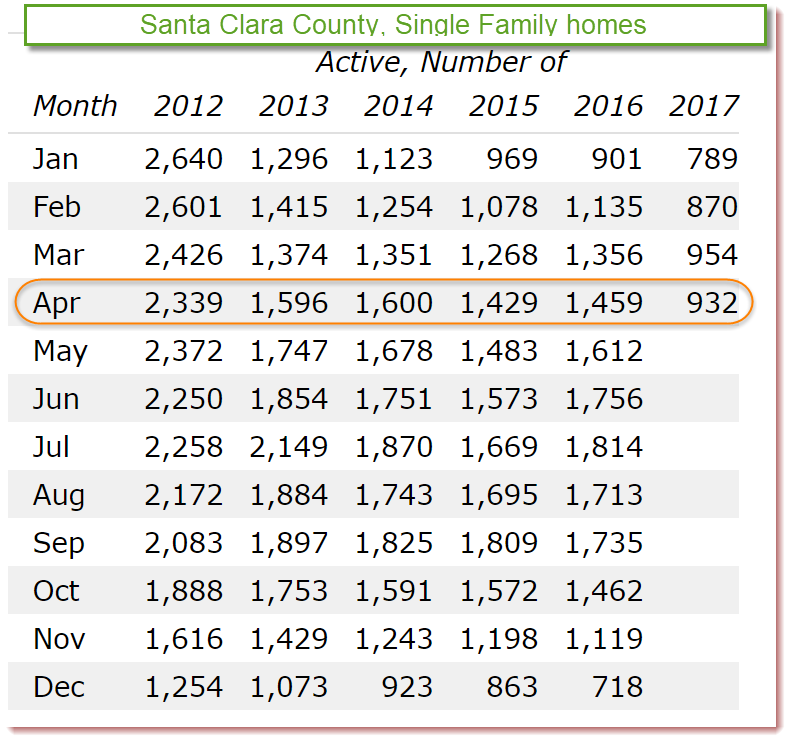 The situation has only intensified since I first wrote this article in early 2012.  There are many reasons for the problem: older people won’t sell for tax reasons (mostly capital gains). move up buyers who elect to stay and add on rather than deal with hugely increased property taxes.  In general, home owners are opting to “buy and hold”.

Is it hard to buy a house in the San Jose area? You bet.  And unfortunately, I don’t see an end in sight anytime soon.

Right now I’m working with a number of very frustrated home buyers.  Silicon Valley real estate inventory is painfully low, and in the lower price ranges especially, that means multiple offers are fairly common.  FHA home buyers, in particular, are getting out bid and out negotiated by all cash buyers, many of whom are investors.

How low is the inventory?  Let’s have a look at January’s inventory for houses & duet homes (“class 1” or single family homes) over the last ten years in Santa Clara County (San Jose, Los Gatos, Campbell, etc.):

The average January inventory of available houses over the last 10 years is 2,636.  At 1,382, January 2012’s available inventory of houses for sale in the San Jose area was just 52% of normal.  It’s not really much different now, in early February (just did a quick check on the MLS and it’s  1509 houses now – 630 have sold & closed in the last 30 days so that’s 2.4 months of inventory – a hot seller’s market).  This is what constitutes a very severe inventory shortage.

Demand hasn’t slackened, but supply has.  You know what that means – it will push prices up, it will make buyers crazy feeling.

Why is inventory so low?

A common question is this: why is inventory so low?  I believe that there are a few drivers.  First, many home owners who would like to move really need more equity to do so.  They are waiting for the market to recover.  Some may be waiting for prices to return to their previous highs (they could be waiting awhile). Others just need a little more to make the move possible at all.

Many owners of higher priced homes are holding on until the second half of 2012, when it is expected that there will be more people with buying power due to recent and upcoming IPOs.  Economists are now predicting a bit of a frenzy the second half of this year with prices in more expensive homes getting pushed up due to competition from employees of various high tech firms.  Smart buyers are trying to get in before that hits – a real challenge given the inventory situation.

Reality check: not every house is selling!

The best properties are selling well – those which are newer or nicely remodeled, in turn key condition, easy to see, great marketing with multiple photos, appropriate MLS exposure and priced aggressively.  This is what every buyer wants, the perfect house.  Most of my clients tell me that they are willing to replace carpet and repaint, but they don’t want to do anything big, such as kitchen or bathroom remodels, removing a pool, foundation or drainage repairs, etc.  No one does!

One of the easiest ways of improving your odds on being able to purchase a house is to move away from the new or fully remodeled vision of your ideal house.  Lower your budget a little, decide to prefer homes that have been sitting on the market not due to location issues, but rather to pricing or condition issues – both of which can be fixed.

For instance, many home buyers will take a pass on properties which have a pool in the backyard.  A few months back, I did some research and found that houses with pools are harder to sell right now.  Appraisers count a pool as an improvement, but many consumers view it as a liability – an ongoing monthly expense to heat and maintain and a risk if there are small children.  Many think that it will be overwhelmingly difficult to remove and relandscape a pool, so will not even consider writing an offer if the property includes an in ground pool.

Truth is, it’s not that hard to hire a company to redo a backyard; it is not invasive the way a kitchen remodel is.  You could have it done before even moving in!  The cost varies on whether you want the pool fully removed or partially as well as how to relandscape afterwards.  I have seen bids for pool demolition work under $10,000 (relandscaping extra) with more bids between $10,000 and $25,000.  Lawn and sprinklers are not so expensive to add!

The pool issue is just one example – there are many other properties for sale which are passed over due to the condition not being ideal.  Remodeling can feel a little scary but when inventory is so tight, it can be the ticket to home ownership.

Likewise with over priced properties.  Although most homes sell within a couple of percent of list price, there are exceptions.  Sometimes real estate is badly overpriced, and in those cases you may get a seller to agree to a larger price reduction – 10% may even fly.  (This is unusual, I would note. Usually if a house is not worth within 5% of list price, the seller is unreasonable and won’t accept an offer which is less. But sometimes it can work.)

Here’s to the over priced ugly duckling.  It could be your best friend when inventory is rock bottom!