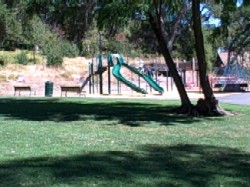 Wildwood Park is downtown Saratoga’s quiet getaway spot. Situated on Fourth Street, just off Big Basin Way in Saratoga Village, it’s a stone’s throw to great dining and shops, but borders a pleasant residential neighborhood too. For people fortunate enough to buy or rent a home in the downtown area, the park is a wonderful plus.

What makes Wildwood Park in Saratoga so special? In addition to a nice play structure and an open, grassy area (which you might expect in any city or town park), Wildwood offers a sandy volleyball court, restrooms (many smaller parks don’t) and perhaps best of all, Saratoga Creek. Tall Eucalyptus and Sycamore trees grace this downtown retreat too, so there’s no shortage of shade on warm days.

As a teenager, I attended Saratoga High School (class of 1977) and visited the park with friends or to work on my photographic skills. This is a great location for shooting pictures. What could be cuter than a child or pet by the creek? [Sometimes my girlfriends and I used to watch old movies in the quonset hut theater, The Vitaphone (it was at Big Basin Way and Third) that was then a part of downtown Saratoga’s charm. I wish I had thought to take pictures of that theater when I was downtown – it’s long since gone. Happy downtown Saratoga memories.]

Recently I stopped in to try videotaping the park since I was in the neighborhood on the real estate broker’s tour and literally was on 4th Street already. About 2 weeks ago I got a Flip Video so am learning (critics be gentle!) and hope that these couple of clips give you a sense of the tranquility and beauty of the park if you have not had the pleasure to visit it in person yourself. If you live elsewhere in Silicon Valley, perhaps next time you dine in Saratoga, you can make a side trip to see the quaint little park nearby. It’s a worthwhile visit, especially if you have a camera in hand!