What is an exclusion in a real estate contract? What is an inclusion?

What is an exclusion in a real estate contract? What is an inclusion? Both of these refer to fixtures at the property which is for sale. If you want to sell your home in 2021, it’s very important to understand the “law of fixtures” as it relates to what you leave and what you take with you – unless the inclusion or exclusion is specified in the contract.

What is a fixture?

Generally speaking, a fixture is any item affixed or attached to the house, townhouse, condo or property which is installed with the intention that it be there permanently.

Examples of fixtures (items which stay or are included):

The exception to the rule is anything attached solely for earthquake safety.  This would be the case if you have a large hutch which you have bolted to the wall so that it doesn’t topple in the case of a big quake. In Silicon Valley, fixtures are normally included with the sale of the home.

What is an exclusion?

Exclusions refer to fixtures which the seller does not want to include with the sale of the real property (real estate) but which otherwise would or should stay. 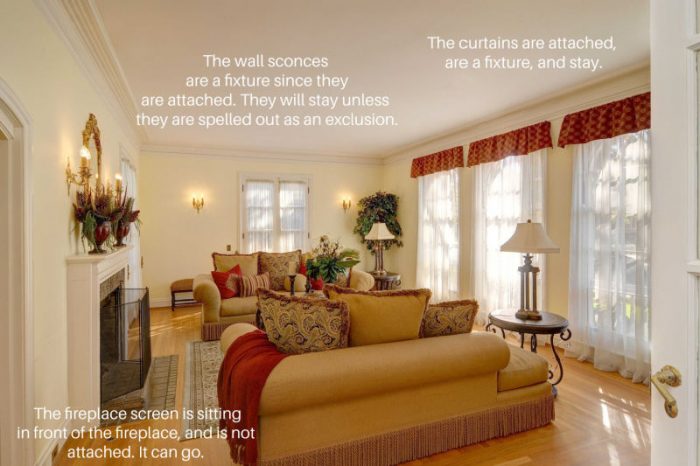 It would be noted either in the MLS, with a note at the property or mentioned when the buyer’s agent calls the listing agent to ask about offer instructions. Other examples could be a special fireplace screen, curtains in one or more rooms (may match a bedspread or other décor), or even a rose bush in the garden that has sentimental value.

What is an inclusion?

Inclusions refer to personal property (property which is not affixed) which the seller will leave even though it is not required since it’s not attached.  Commonly we see refrigerators, washers and dryers included, even when they are not attached.  Sometimes furniture may be negotiated also, such as a pool table, patio dining set, a sofa or perhaps a very large dining table that won’t fit into the seller’s new house, but fits where it is perfectly.

Trouble with an inclusion or an exclusion

Recently a friend of mine purchased a vacation home which had been used as an Air B&B rental. She got the townhome plus all of the furnishings (personal property), plates, cutlery, etc. A risk when there are many inclusions is that the appraiser may not know how to value all of the non-real property and you could end up with a low appraisal. Rather than roll it into the contract, often there will be a separate bill of sale for the inclusions.

Upsets can happen if either the buyer or seller (or their real estate agents) have different expectations of what stays and what goes. That’s why anything not built in must be named in the contract if it is to stay with the property, or if the seller does not want it to stay.

Sometimes it is a bit of a gray area, as with a wall mounted television set. The bracket part is certainly built in. It might be possible to lift the TV out of the bracket, though. Usually a television is not included, but the bracket may be – just depends on how the contract is written.

A free standing oven and stove combination is technically personal property. Normally a range would be included even if it’s not built in. To be sure, though, it is wise to write in that the appliance should remain with the property if that is what the buyer wants.

It is important to note that if an inclusion is mentioned in the MLS, it still should be written into the purchase agreement if the buyer wants it. Otherwise the seller is free to donate, share or sell those items.

When in doubt as to whether or not something is included or excluded from the sale, always ask before writing or accepting a contract to avoid unhappy surprises or conflicts later!